Backwoods Rebels and Outlaws and the Birth of Racing 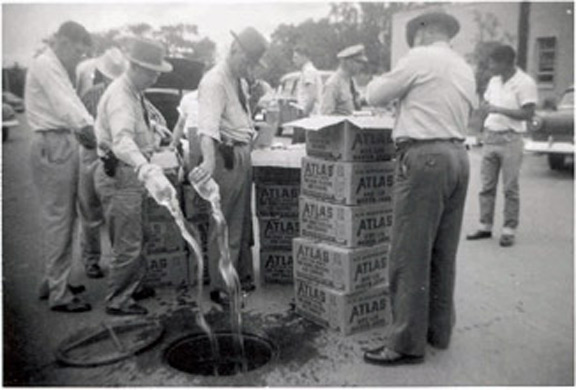 Backwoods Rebels and Outlaws and the Birth of Racing

If horse racing is the sport of kings, NASCAR is the sport of rebels and outlaws. It reflects a big difference in the attitudes and history of these sports. Horse racing, as we know it, grew out of war. Kings and emperors would send their best knights and warriors to face off in tournaments, like all the jousting you see in the movies. It was done as a display of wealth and authority. They wanted to let the little people know just how much power and authority their rulers had.

NASCAR is the exact opposite. Most people know that NASCAR has its roots deep in the outlaw tradition of Appalachian bootlegging and moonshine. One thing you got to know is the difference between a criminal and an outlaw.

Criminals take what they want from people or otherwise harm them to satisfy their wants. Outlaws are the ones who exercise their God given right to live their lives as they see fit, despite whatever some law says. They aren’t out to hurt anybody.

When you think about it, kings are criminals and the people who want to be free are outlaws. Which is one reason we did what we did in 1776.

It was in Florida during the 1920’s when NASCAR got its start. Daytona became the preeminent place for the world to set land speed records. This brought in all sorts of people who had and/or loved fast cast.

Quite a few of these folks were bootleggers and moonshiners who had to have a fast set of wheels to keep ahead of the law. You know it didn’t take long before a couple of bragging rednecks decided to settle an argument over who had the fastest car by having a race. And stock car racing was born.

It didn’t take long for Prohibition to go down in flames. That left a bunch of bootleggers suddenly having to look for legitimate work. Most of them found a way to make ends meet either farming or working in a factory, but a few just couldn’t leave the life behind. They needed that excitement. Whisky was legal, so running a still wasn’t in the cards, but running the cars sure as heck was.

The drivers and mechanics were already experts at modifying regular cars for extra speed and handling so the drivers hauling moonshine could better outrun the law. It’s also a safe bet that all the tricks used to keep the booze hidden, if they ever did get caught, was also used to make the cars lighter and give them an extra edge. This outlaw expertise produced some awesome automobiles, in the early days of the sport.

Eventually, the hard work and leadership of Bill France birthed NASCAR and turned it into a legitimate sport enjoyed by millions around the world. As fancy and official as everything is with NASCAR today, it will forever be rooted in the outlaw way of moonshine and bootlegging.